Ljubljana is the capital of Slovenia and it lies right in the center. It is almost an equal distance from Croatia, Hungary, Austria, and Italy. Ljubljana is a small but innovative city with a mythical history, a hip attitude, and a car-free heart. You will see images of dragons wherever you go in this city. Legend has it that a dragon once lived in the Ljubljana river many centuries ago, preying on locals until it was defeated by a Greek hero.

It serves as a symbol of this charismatic town that is very protective of its people, its environment, and its history. Once you are in the town center’s narrow streets, you will hear bicycle bells instead of traffic and you will find riverbanks lined with historic architecture, pubs, and cafes, instead of gridlock. The city banned cars in 2007 and it has been churning out sustainable programs since then. Here are the top must-see attractions in Ljubljana, Slovenia.

Take the gentle stroll or ride the funicular to the Ljubljana Castle. It is one of the city’s beloved landmarks and has been standing for over 900 years. Apart from being a Window into history, this castle is also part of daily life and is sometimes used for art shows, concerts, and weddings. At the Museum of Puppetry, you can also discover the tradition of puppeteering or simply enjoy the spectacular views over the city.

On the east bank of the river lies the old town while the more recently built galleries, parks, and buildings lie in the West Bank. The Triple Bridge links the two. The Triple Bridge is one of the many iconic masterpieces designed by architect Jože Plečnik, the city’s favorite son.

This oval-shaped square is the city’s heart and a popular meeting point. This Square was named after France Preseren. His poem “A Toast” became the national anthem of the country. Enjoy a pastry and a coffee on the steps of this square’s statue, meet the locals or watch as the city goes about its activities.

The Franciscan Church is another great place you should explore. It had a dramatic staircase that faces the Preseren Square. It was originally painted red, but it has now faded to salmon pink. 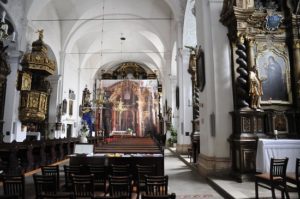 Congress Square was built on the site of a ruined monastery. You can see the main building of the University of Ljubljana from here. Many political hard hitters have used the balcony of this building to address the crowds.

This is one of the oldest musical institutions in the world. It has connections to composers such as Brahms and Beethoven. It is still a delight of many music lovers today.

The Ljubljana Central Market is another great place to catch up with the Town Square and locals. This city also offers free bicycle rentals that you can easily pick up to further explore the city.